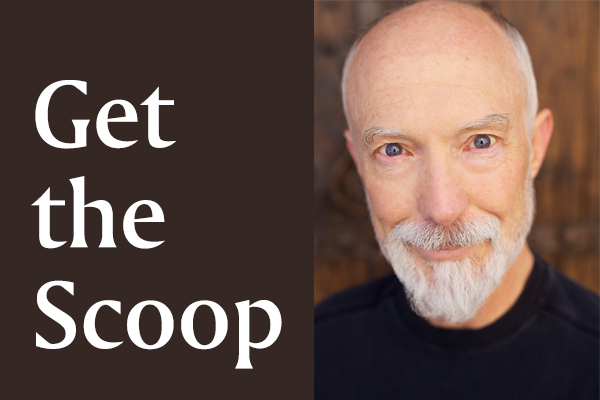 Resident Dramaturg Gina Pisasale hosts Graham Smith as her guest for Scoop, a casual conversation before every Wednesday evening performance. In Lucy Kirkwood's The Children, Graham plays Robin, a retired nuclear engineer who wrestles with the notions of legacy and shared culpability in this darkly funny disaster drama.

Gina: What excites you about this play?

Graham: It has only three characters, each in their sixties! That’s fun by itself. It is British, so we get to play with accents.  And one of its several themes is that legacy,  both personal and generational, is revealed in retrospect: so what do we do now?

Gina: Has any part of working on the play surprised you in any way?

Graham: It is almost always surprising with a good play to find out how shallow was my initial reading of it. But what is both impressive and somehow affirming about this play is how Lucy Kirkwood has managed to implicate each person on-stage (and perhaps in the audience as well) while not blaming any of us. It is eminently fair. (And funny.)

Gina: What was your first work as a performer?

Graham: At five years, I started doing shows with my family’s vaudeville-magic show, “Saucy Sorcery” with C. Shaw Smith, my father. My mother played the piano, my father did magic with punny patter, and the five Smith offspring vanished, appeared, escaped, floated, you know....like you do. My father worked at Davidson College during the school year, but every summer from 1961 through 1969 we played colleges and universities all over the country, culminating in a tour of army nightclubs throughout Germany and Italy in ‘69.  I continued performing with my father in the summers through my junior year in college,  (after the family went on to individual pursuits), in the slightly revamped show, “C. Shaw Smith’s Wacky Wizardry ... a one-man show with others.”

Gina and Graham invite you to Scoop every Wednesday evening to find out more about the process of creating this production. Hear stories from behind the scenes, learn about Kirkwood's inspiration for writing this play, and much more – while sharing snacks and conversation with an intimate group of fellow theatre-lovers.

Scoop starts at 6pm in the Congdon Center Library on the dates below. Add it to your ticket for $5 when purchasing tickets to The Children online, buy separately (you can even come to discuss the show after you've seen it, without having to stay for another performance) or call the Box Office at 610.644.3500.