A Conversation with Colman Domingo 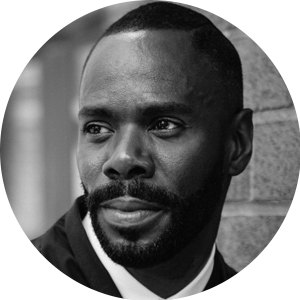 Colman Domingo, Playwright & Director of Dot, sat down with Resident Dramaturg Gina Pisasale to share some background and his thoughts about the play.

Gina: Can you tell me a bit about the origins of this play, its style, and its themes?

Colman: I think the themes of the play chose me. Thematically, as a writer, what runs through my work is the question of mortality and how we fight for our humanity. I’m very interested in seeing how we fight for one another, to love each other, to hang on to each other. Especially with all of the things tearing us apart right now.

A few years ago, I had four friends - all single mothers in their 40s, and all with mothers with long-term illnesses. I wanted to write a play about it... watching their strength, watching their humor, watching the way they wrestle with their families... I realized that although they were dancing with this dark comedy, there was so much pain and trauma underneath. I knew from experiencing the death of both my parents in the same year - the only way I got through it was by was laughing.

I personally enjoy theatre where the comedy and tragedy bounce right up against each other, because I think that’s how we make it through all this stuff. I know that for sure that’s the only way we move forward and try to find a new way. Because otherwise, we fall apart.

So, this play is not your very special play about dementia. We’re in a house in West Philadelphia populated with people who are Black, who are white, who are gay, who are straight, who are immigrants – all these stories coming to a crossroads and they are wry and wicked and funny. And in the center of this house, memory is being challenged. There’s a woman, who is strong and holds the voice of a community. And her decline is echoing the decline of what’s been going on outside in the neighborhood. It’s trying to fight for itself from the inside out.

But no one is feeling sad about their situation or wallowing in their problems. Not even Dotty. Everyone in this play is fierce and has that Philly fight in them. They’re arguing, and they’re passionate, and they’re funny, and they’re sexy! There is fire underneath everyone, sometimes with an intensity that even they don’t know how to deal with as they’re trying to figure it all out. I was born and raised in West Philly, and these are the kinds of people I know. I wrote this with love because I love these people, and there’s a lot of love in them. They’re the kind of people that speak before they think. And they speak unabashedly, but they love each other to the core.

Are all of the characters based on someone you know from West Philly?

Certain things are based in some truths that I know about people and human behavior, but then they become an amalgamation of many people... with this play we start with tropes, and then we smash them. So anything that we may believe about gay men, the elderly, immigrants, or urban areas actually has much more depth and complexity. Even a woman that we think is all sound and fury takes on the wisdom of a Shakespearean fool. Or the invisible caregiver actually has a story once you ask him a question. And perhaps the single woman who keeps it together finally cracks and what she is dealing with roars out.

Why does telling this story matter to you in our current moment?

I think that this play is about America. We’re dealing with how people are managing and working through their lives, all revolving around questions about memory and legacy: Who were we? Who are we now? And who are we going to become?

One of my friends said, “I’m with my mother, and I’m trying to get the memories out of her to put into my son or they won’t know that we were here.” I started to write this play because I had so many questions. How do you do this? How does a family come together? How do we care for ourselves and for one another when crisis drops into our world? How do we do it with some sort of grace?

I don’t know if I have answers. But I try to get to a place where we can come together at the table and try to figure it out, so that there is a little hope. My characters don’t change because I don’t think people actually change. But they’re going to take a step. And if we can take a step together, we might just win.