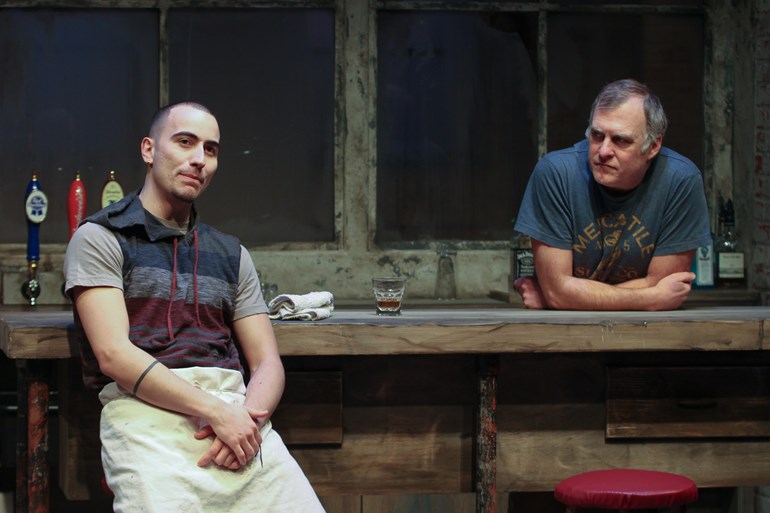 Resident Dramaturg Gina Pisasale hosts NYC-based actor Dakota Granados as her guest for Scoop, a casual conversation before every Wednesday evening performance. In Sweat, Dakota takes on the role of Oscar - the quiet bar employee who winds up at the center of the play's drama. Gina sat down with him to learn about his recent appearances on stage, experience rehearsing for Sweat – and of course, bruised elbows.

G: What has been the best part of the rehearsal process so far?

D: For one, this cast and creative team is top notch. It’s kinda like playing tennis - watching them forces me to make uncontrollable sounds with my mouth, which to them is probably annoying... but I just can’t help it, they are just that good. For two, working with Paul [Dennhardt, Fight Director] and Elena [Araoz, Director] again is a lesson in humanity, as these guys constantly bring you to life in extraordinary ways. They have a very keen eye on what decisions humans make on a day to day basis. And they also like to throw me against stuff a lot which is fun, I’m their stunt man, and I’m sure my elbows will hate me for it later on. But I’m happy to do it. I think the way to a man’s heart is a punch in the face.

G: How did you get into acting?

D: In high school I did it to meet the ladies. All kidding aside, I found the theatre community to be one that was really inviting and close-knit, in that you kinda meet mentors just like in any other field that propel you to the next level. A very good friend of mine at the time showed me that acting could be a fulfilling career and recommended books to me. At a point in my life when I wanted to find meaning and purpose, these books acted as a guiding light towards a meaningful life in the arts.

G: You recently played Tybalt in Shakespeare Festival St. Louis’ production of Romeo and Juliet. How does living through that language compare to living through Lynn Nottage’s prose in Sweat?

D: If Nottage and Shakespeare have anything in common artistically, I’d say it’s their love for English language. There’s something to be said about Nottage's writing that makes you just want to speak what she wrote. The script is just teeming with juicy words and circumstance. Shakespeare is the same. There’s joy in speaking his words. Comparatively, it’s about character. Tybalt is very different from Oscar. One being a privileged bully and the other the invisible outsider. But similarly they are young boys looking for purpose.

Gina and Dakota invite you to Scoop every Wednesday evening to find out more about the process of creating this production. Hear stories from behind the scenes, learn why Lynn Nottage decided to write this play, and much more – while sharing snacks and conversation with an intimate group of fellow theatre-lovers.

Scoop starts at 6pm in the Steinbright lobby on the dates below. Add it to your ticket for $5 when purchasing Sweat tickets online, buy separately (you can even come to discuss the show after you've seen it, without having to stay for another performance) or call the Box Office at 610.644.3500.