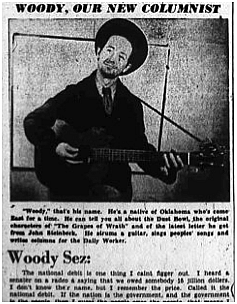 How the story goes is that in 1939, after spending time looking for work in fruit orchards in California with thousands of migrant families - that's folks mainly from Oklahoma, Arkansas, and Texas who had come up on hard times losing their houses, farms, and worse in the Dust Bowl and Great Depression - Woody Guthrie was back on Los Angeles KFVD radio, a station on the left side of the political dial. There, he met Ed Robbins, editor for the People's World, a Communist newspaper, and host of a radio show with a daily roundup of news mostly on workers' struggles and unions. Ed liked Woody's stuff and invited the "cowboy crooner" to sing at a rally, but asked if he cared if it was for a left-wing gathering. Woody replied, "Left wing, right wing, chicken wing - it's the same thing to me." Woody's Okie style, stories, and hard-hitting songs were the real deal and audiences were captivated.

A few months after sleeping a few nights here and there on Ed's living room floor, even though Woody had an apartment with a wife and two kids by then, Woody asked, "Ed, I'd like to do a column for the paper - just little comments on things the way I see them." Skeptical of his lack of education, Ed asked for a few samples. Woody pulled out a pile of papers with 30 short articles and small cartoons. On May 12, 1939, readers got their first glimpse of a new daily column: "Woody Sez."

Woody was never a Communist Party member. His daughter Nora explained, "He refused to belong to anything, and that gave him permission to love everything." Especially those down and out. In a radio interview, Woody described his music:

"I hate a song that makes you think that you're not any good... Bound to lose. No good to nobody. No good for nothing. Because you are either too old or too young or too fat or too slim or too ugly or too this or too that... Songs that run you down or songs that make fun of you on account of your bad luck or hard traveling. I am out to fight those kind of songs to my very last breath of air and my last drop of blood. I am out to sing songs that will prove to you that this is your world and that if it has hit you pretty hard and knocked you for a dozen loops, no matter how hard it's run you down nor rolled over you, no matter what color, what size you are, how you are built, I am out to sing the songs that make you take pride in yourself and in your work. And the songs that I sing are made up for the most part by all sorts of folks just about like you."