From the title of our brand-new panto, you may have been able to guess that Little Red Robin Hood is a combination of two classic tales: Little Red Riding Hood and Robin Hood. If it’s been a minute since you’ve listened to the Into the Woods soundtrack or watched the 1973 animated Disney film Robin Hood, that’s okay! We’re here to refresh your memory on the inspiration behind the script. 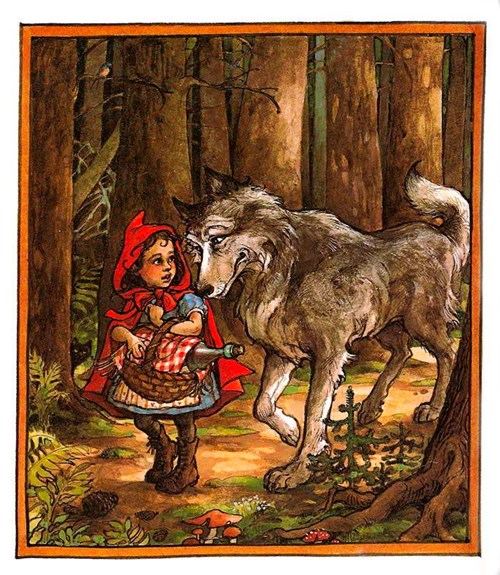 Songs, movies, books, art, television shows, theatre, and more – the little girl in a red cape has been a pop culture icon since Grimm's Fairy Tales in 1812. Variations of this story have been passed around from generation to generation beginning in 10th century Italy, but the tale as we know it was popularized by the Brothers Grimm. Their ever-popular version of Little Red Riding Hood goes like this: Little Red, nicknamed because of the color of her cape, ventures off into the forest with a basket of food to deliver to her sick grandmother.

Red’s mother warns her not to stray from the path, but, being a teenage girl, she decides to rebel. On the way, she meets a wolf who tries to distract and befriend her. Turns out, he’s not as interested in her basket of food than having Red and her grandmother for dinner. So while Red is off picking flowers, the wolf goes to granny’s house, eats her, and dons her clothing. When Red arrives, the classic “what big ears/eyes/mouth you have” exchange occurs (how do you not realize your granny suddenly has fur, Red?) and the wolf eats her too.

In the first written version of this tale by Charles Perrault, it just ends there. The Brothers Grimm, however, add a woodsman character who somehow sees this all go down, runs into granny’s house with an axe, slices the wolf’s stomach open, pulls Red and her grandmother out, fills the wolf’s stomach with rocks, and kills him. Luckily, the two haven’t been digested yet and somehow aren’t covered in guts? This part isn’t very logical, but it’s still a pretty gruesome story. 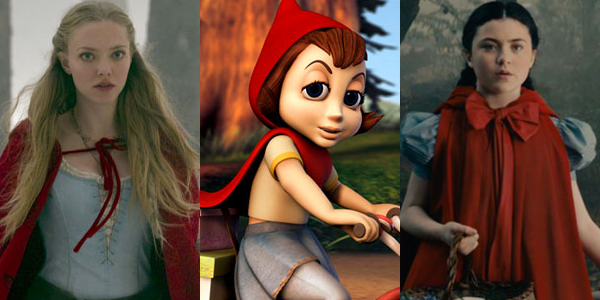 From Hoodwinked to Shrek to Into the Woods, the most common and most popular recurring scene from this story is Little Red walking in to see the wolf dressed as her grandmother. Although, in most modern versions (including ours), the real granny is usually tied up in the closet and not just sitting, alive, in the wolf’s stomach. Some new versions (the show Once Upon a Time or the 2011 Red Riding Hood film with Amanda Seyfried) feature a werewolf rather than a regular wolf and/or Little Red herself becoming the wolf. Unfortunately, there is no lycanthropy in our production, but we hope you enjoy our less horrific, G-rated version nonetheless. 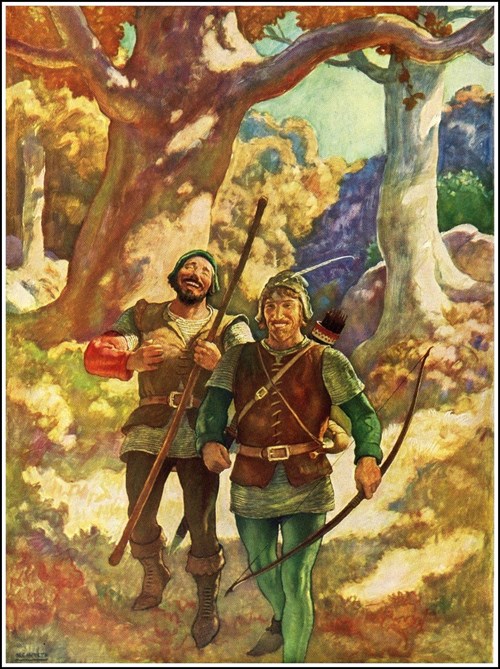 The first ever mention of Robin Hood in old English ballads and plays appeared around the 15th or 16th century. There are many different versions from this time period, but the common characteristics throughout these early tales are that Robin Hood is charming, an excellent archer, and an outlaw who doesn’t follow the rules. Other iconic characters like love interest Maid Marian, Friar Tuck, and his enemy Prince John come in a bit later. Since Prince John is a historical figure who reigned in England from 1199-1216, we can assume that Robin Hood's story is set in medieval times in the county of Nottinghamshire, despite it being written in the renaissance.

In 1883, the most popular version of Robin Hood was written and illustrated by Howard Pyle and given the title The Merry Adventures of Robin Hood. Pyle compiled all the old English ballads and plays and turned them into a collection of tales that was easily digestible as a children’s story. Every chapter depicts Robin Hood resisting authority, recruiting new members to join his Merry Men, and aiding his fellow citizens. Pyle's is the first version to specifically mention Robin Hood stealing from the rich to give to the poor, the most well-recognized theme to this day.

From Pyle’s novel, the 1938 film The Adventures of Robin Hood was born, telling one complete Robin Hood story as opposed to a series of endless adventures. In this version, King Richard of England is captured and his greedy younger brother, Prince John, reigns in his place. Robin Hood vows to his followers he will restore King Richard to the throne and save Nottinghamshire from Prince John’s tight grip and high taxes. Robin gathers up his Merry Men, including Friar Tuck, and makes them swear to follow 3 rules: fight for a free England until Richard is returned, steal from the rich and give to the poor, and always be chivalrous towards women. 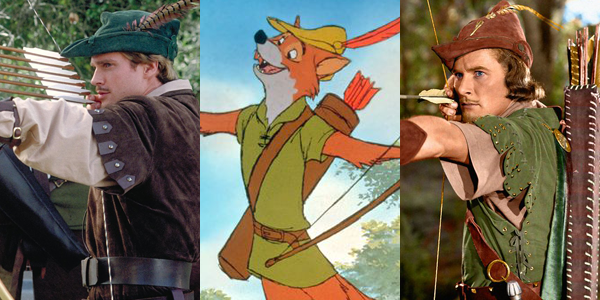 Yet, when Robin Hood and Marian first meet, she’s not that into him. She thinks he’s just a criminal, but once he proves that he’s fighting for the good of England, they fall in love. Marian even goes undercover to save him when he gets arrested, therefore making her mark as one of the strongest female characters in early English literature. In the end, after Robin Hood saves the day by exiling the evil Prince John, he marries Marian and they all live happily ever after.

Although there aren’t as many pieces of media inspired by Robin Hood’s adventures with his Merry Men, he's arguably the most iconic figure in English folklore whose legend holds a powerful message of charity. Incidentally, his story overlaps with Little Red Riding Hood in the Shrek films, but Robin Hood can be seen on his own in Mel Brooks' parody Robin Hood Men in Tights or the 1970s Disney movie simply titled Robin Hood, in which he's an adorable animated fox sporting that classic green outfit and red-feathered hat. 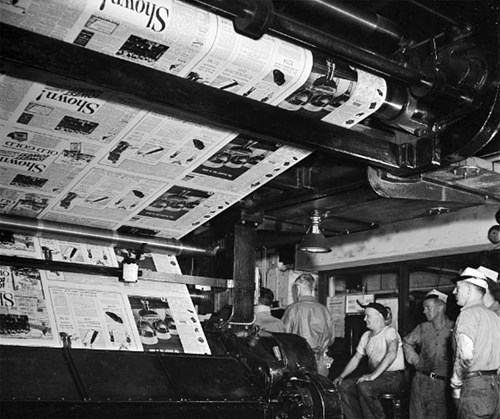 Now, back to our panto. Little Red Robin Hood wasn’t just created by overlapping these two folk tales. In this ambitious mashup, playwright Kathryn Petersen was also inspired by 1940s gangster films, as well as current events. In the 1940s, the newspaper industry was booming. Everyone was fighting to put out the hottest story the fastest. Not much has changed, except we now find ourselves getting the news on Facebook or Twitter. In our crossover panto world, the press and media representation play a huge role in moving the story along and allowing Little Red to become a famed hero. 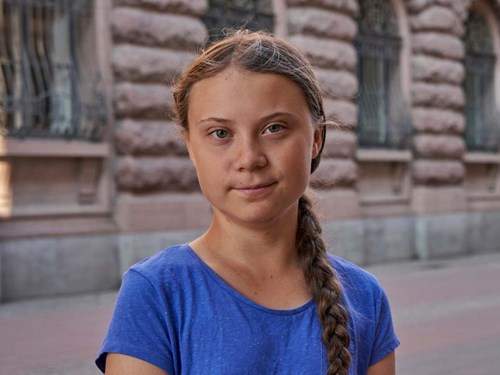 Our Little Red, named Amelia, is partly inspired by young environmental activist Greta Thunberg. If you don’t know Greta, she’s a sixteen-year-old Swedish girl recognized around the world for her nonviolent protests against climate change and the inaction of international leaders. Just like Pantoland, our planet needs heroes of all ages to stand up for what they believe in, and Petersen knew she wanted to celebrate the power of young people in Little Red Robin Hood.

The result? A musical mashup full of colorful capes and high-spirited heroism, onstage now through January 5. Get your tickets here!