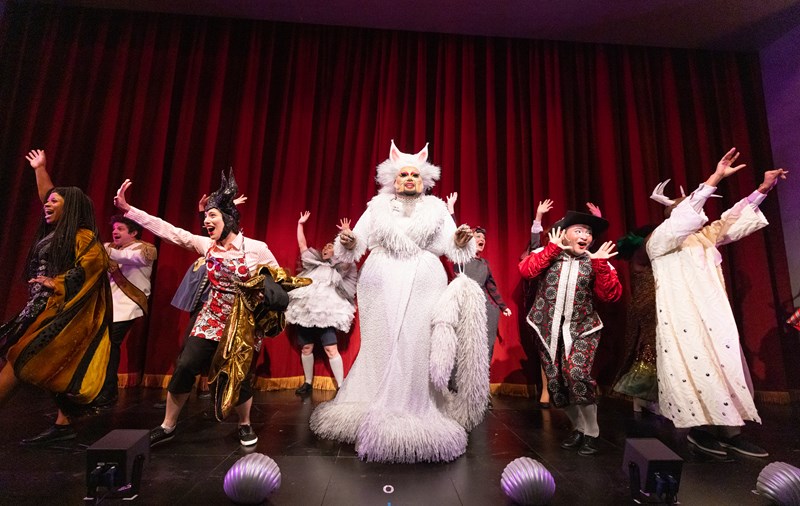 We relish this mix of old and new, of artists with a wide range of experiences and backgrounds. Although every People’s Light Panto possesses certain qualities and ingredients, the form is always in a state of evolution, responding to the creativity of the collaborators involved and the world we all share. Alice In Wonderland embodies this spirit of growth and discovery. Heart-rich and genderfull, we believe it to be our most inclusive, accessible, and sparkly Panto to date.

Since 2004, People’s Light has created and staged our own unique spin on the British pantomime as a way to bring together audiences of all backgrounds and ages during the holiday season. Our distinctive approach includes original music and is more family friendly than many of its antecedents in the United Kingdom, but our homegrown version shares many core ingredients: it is based on a  familiar tale, a mashup of comedic styles, interactive and improvisatory, non-denominational, joyfully disruptive in nature, and spiced with local references (and a Star Wars quote or two); there is raucous boo-ing, “messy
bits” and “silly songs,” and often a cascade of candy. 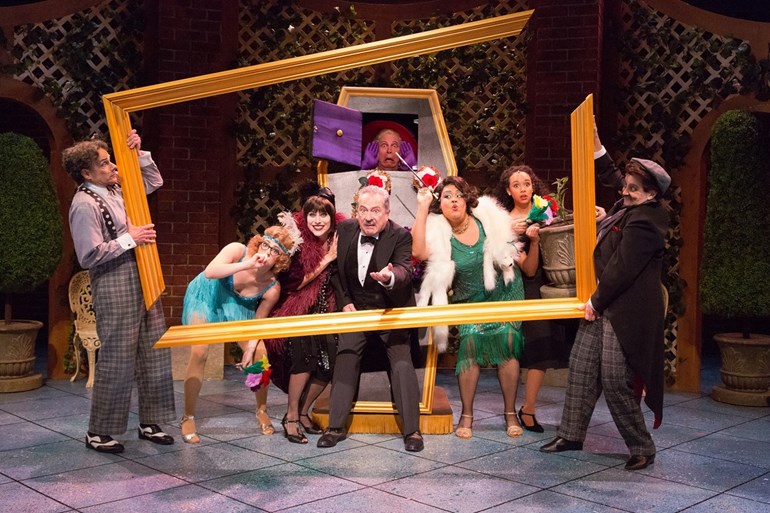 During those initial years, writer/composer team Kathryn Petersen and Michael Ogborn worked closely with an intrepid group of directors, choreographers, actors and musicians to establish the Panto as a holiday season tradition. In all these Pantos, longtime company member Mark Lazar portrayed The Dame. Although Mark appeared in numerous other People’s Light productions, his Dame alter ego made him a local celebrity. Now living with his family in Florida, Mark made far more than a mark on the Dame, the Panto, and on our theatre as a whole. As have company members Tom Teti and Susan McKey, who have also appeared in nearly every Panto we produced.

Within a few years, the People’s Light Panto became a huge success, surpassing the iconic Christmas Carol in annual sales and elevating the identity of People’s Light in our region. While no production at a non-profit theatre “makes money,” (ticket prices would need to at least double before that could begin to
happen) the Panto did inspire much acclaim, generate valuable revenue, and introduce thousands of new patrons to People’s Light, including countless young people. It also launched our program of Relaxed Performances that now extend to all productions in our season. 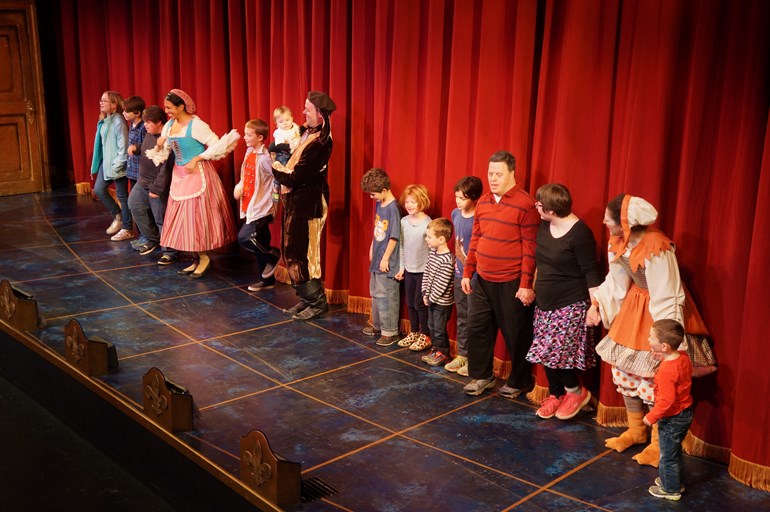 For a while we produced an original new panto every season, each possessing many similar elements, but routinely experimenting with new ideas. Eventually, we began to intermingle new pantos with revivals of past pantos, but even the remounts would include all kinds of new inventions.

As we headed into 2018, however, the blush on the rose had faded slightly. Ticket demand had begun to wane as we remounted our previously celebrated Aladdin. Unfortunately, we also made a series of poor assumptions and decisions around that production. They demonstrated various degrees of insensitivity regarding representations of race and gender. This caused harm inside and outside our organization. As a result, after Aladdin, we took a step back to reflect on whether our holiday tradition was as inclusive and accessible as we intend it to be, whether our audiences were growing tired of it all, and whether there were ways to improve the artistic and social quality of these productions without sacrificing the aspects of past iterations that possessed such disruptive delight. 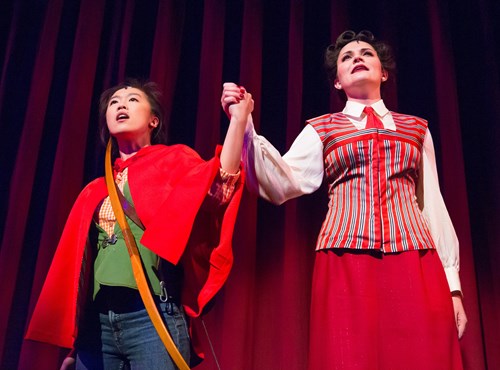 These conversations, which predominantly focused on EDI and artistic practices, engaged every department at People’s Light. They greatly shaped our wildly successful 2019 premiere of Little Red Robin Hood, which reunited Petersen and Ogborn, and brought Director Bill Fennelly to our theatre for the first time. Even more, these discussions impacted our approach to Alice in Wonderland, which had been slated to premiere in 2021 but was postponed due to the domino effect of the pandemic.

From the start, we conferred with our new team of Panto authors, Jennifer Childs and Alex Bechtel, about how to create a holiday fantasia that retained all the most joyful, all-ages elements of our past pantos, but also had the permission to stake new ground. Jen, the founding artistic director at 1812 Productions, is a walking masterclass in comedy, and infused her to-die-for sensibilities into the Panto mix. Alex’s musical range is only matched by the expanse of his heart as he found a way to elevate both the puns and the pathos into the music. Bill Fennelly returned to direct, filled with ideas for how to make the Panto more sparkly, more buoyant, and more gender inclusive. Bill had already introduced a greater musical theatre and camp sensibility into Little Red, and knew we could go further this time around. For Alice we have expanded our band, amped up the sound and lights, and dove into an aesthetic that is as much RuPaul’s Drag Race as it is vaudeville, sketch comedy, and musical theatre.

Our focus on gender representation resulted in multifaceted, multi-departmental dialogue around the tradition of the Dame. Lifted directly from our British inspirations, the Dame is most commonly presented as a cis heterosexual man giddily appearing in various exaggerated dresses, his combat boots clearly visible beneath the ruffles. Throughout history, the Dame relied on a foundation of homophobia and misogyny for its humor, which we all finally began to recognize around the same time as our institution-wide reflection of the form. 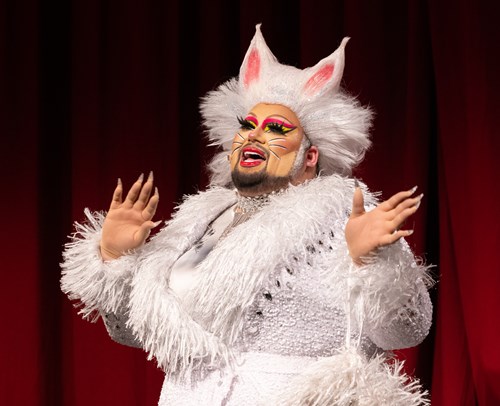 For Alice In Wonderland, we decided to depart from this tradition and explore a new approach to this role of an all-knowing Guide who ushers the audience through the wild and wonderful terrain of Panto-land. Bill Fennelly reached out to Eric Jaffe to see if they would play the Guide role of Dinah/Cheshire Cat as well as serve as our Drag & Gender Representation Consultant. Inventive, fabulous, insightful, hilarious, Eric is a local treasure with a font of knowledge about the many ways drag has informed and elevated American culture across generations. We are honored and delighted they agreed to be part of this next imagination of what a Panto can be.

Efforts towards greater inclusivity often fall short. From the start, the People’s Light Panto aimed for a wide welcome, offering maximum joy to as many people as possible, young and less young. If Alice is a stride in the right direction toward making that welcome even wider, we are certain there is still a long yellow brick road ahead. This is Skiddle Mool, after all, and we have much growing still to do. Fortunately, there will be many more Pantos in the future, and we will continue to reflect, wonder, invent, and evolve. 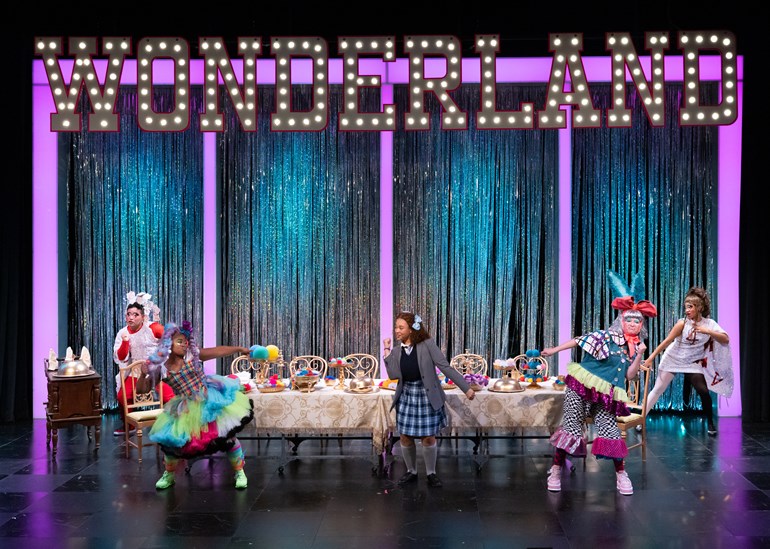 Click here to learn more about our production of Alice in Wonderland.