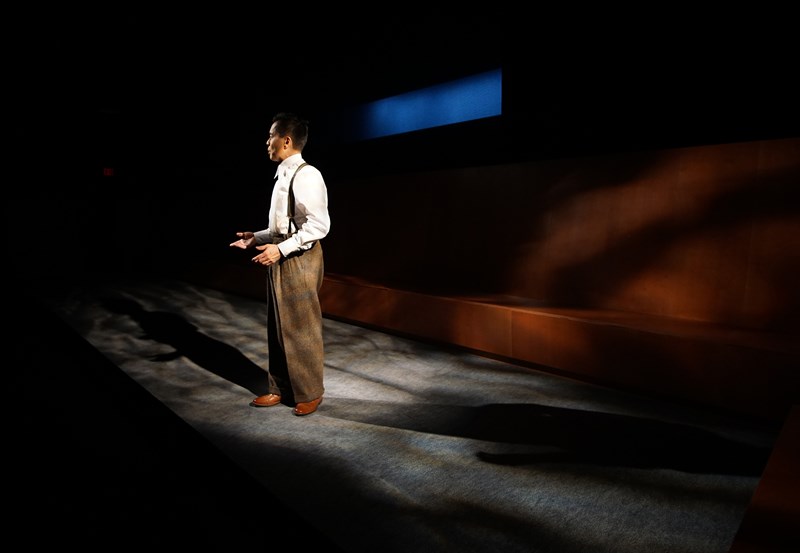 “One question for you,” he poses to the audience. “How would you describe ‘heat in the vast desert’ with sound?”

Gordon Hirabayashi’s journey of resistance takes him into the blazing heat of Tucson, Arizona to serve a prison sentence for resisting the internment of Japanese Americans during WWII, but begins in Seattle. We follow him to school at the University of Washington, to the local YMCA office, his parents' farm, across the highways and backroads of the western United States, and even to the Supreme Court – all on a pared-back set of reclining benches with a handful of props and one actor to weave it all together.

The role of lights and sound becomes all the more important to set the scene. The costumes must be technically perfect. Steven Eng, who plays Gordon and all 37 other characters in Jeanne Sakata’s masterful solo play, never once leaves the stage. There is nowhere to hide in Director Desdemona Chiang's production.

“Des wanted to try telling the story without any furniture,” recalls Dawn Chiang, who also designed the lighting for our recent production of A Christmas Carol. “Let’s see how far we can strip this down and make it very simple, very clean.”

Much of that simplicity is an homage to Gordon’s Quaker beliefs.

“Desdemona and I wanted the space to be a place where people come to listen,” explains Set Designer Se Hyun Oh. “We didn’t want to crowd the set with elements that would disturb that auditory experience. I was inspired by James Turrell’s work, which often involves austere spaces occupied by his lighting installation and its observers. I once sat in one of his installations for hours. I felt like I was meditating. I think that’s what I wanted to capture for this piece.”

“I was emotionally invested in the fact that Mr. Hirabayashi’s journey was a lonely one,” Oh adds. When asked about other past productions he’s worked on, Julia Cho’s Office Hour and Deborah Zoe Laufer’s Rooted came to mind. “Now that I’m thinking about it, I think I really respond to vulnerability. These really wore their hearts on their sleeves.”

Director Desdemona Chiang, Lighting Designer Dawn Chiang, and Costume Designer Katie Yamaguchi to talk about their inspirations, and what it was like coming back to this production two years after it was originally canceled due to COVID.

When asked what made this project special, Nakajo says:

“It’s based on a true story. And definitely working with a design team and cast of Asian descendants: some first-generation like myself, some second-generation. It is meaningful and interesting to share the different thoughts and experiences under similar life circumstances in the form of artistic expression. Some of us came by choice, some came with parents when they were still little kids, some were born and raised here.”

For Costume Designer Katie Yamaguchi, representation is key. “As a half-Japanese woman, I grew up never seeing myself represented. I always felt ‘other’. This is the first show I’ve worked on where we had an all Asian design team.” 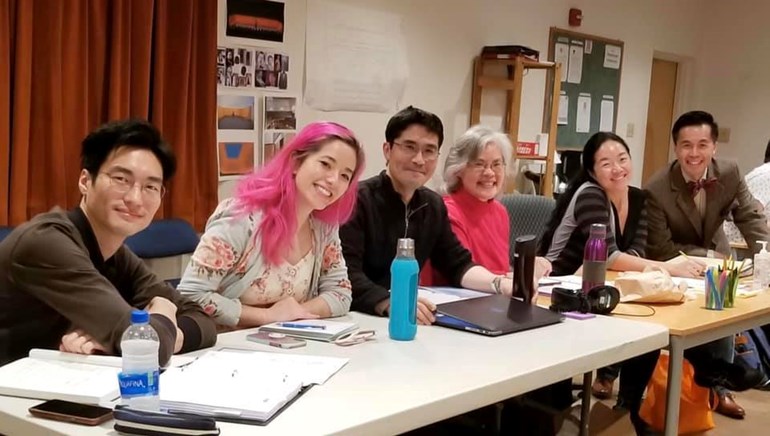 Of course, the most successful design work often goes unnoticed because it’s so seamless.

“If the audiences take and absorb the sound effects/design naturally as part of the play being told on stage, that would be the best thing, I think,” explains Najako. “They should not think about or feel distracted by sound design, even though I feel forgotten.

“It may be interesting for the audience to know that we are aware of the range of just 1-10ms delays in the system. We care about 1 musical note difference, 1 up or down, major key, minor key, 1 beat: it affects the storytelling, at least in my mind.”

It's a compelling notion; that all it takes is one beat to change the story. That one small act of principled resistance, repeated over a lifetime, can lead to seismic shifts.

Hold These Truths runs from April 6 - May 1, 2022. A film version is available to stream through May 3rd. For more information, visit the production page.