The Meaning of Spirit: Spiritual Uprising, Fannie Lou Hamer, and Beyond
May 03, 2021 By: Deja Morgan, Creative Impact Fellow 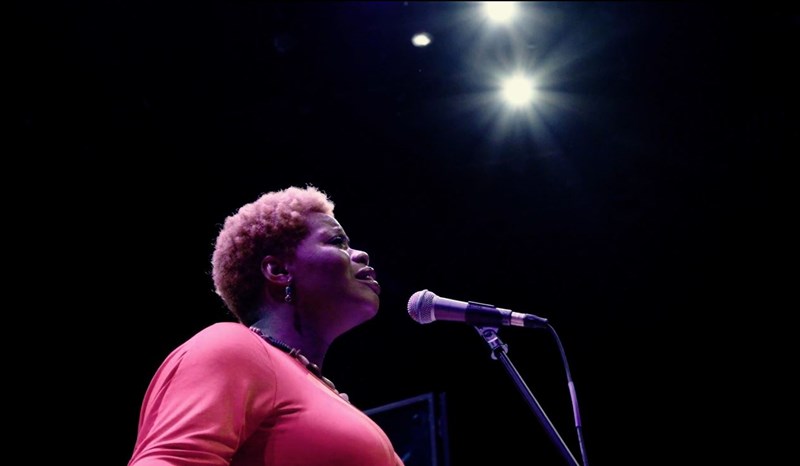 In the very beginning stages of preparing for Spiritual Uprising, I studied a recording of the first conversation between creator Zonya Love and dramaturg Gina Pisasale, trying to capture the meaning of what this piece would be. From the start it was very obvious that the Spirit was going to be potent in this work.

By Spirit, I mean the energy that has carried Black Americans through every single trial and tribulation, the energy that has lifted us up and beyond the impossible, and soared us into the light as we emerge into our beautiful Black futures. That energy. The energy of resilience that Zonya speaks of so tenderly and with so much conviction. And little did I know, that same energy would wrap around me as I began research for the education guide we’d create along with Spiritual Uprising.

One of Zonya’s impulses for creating this work was to continue to uncover the expansive history us Black folks are so commonly kept from. She wanted to uncover this history looking through the lens of Negro Spirituals and then reimagining them in a contemporary context, as a means of connecting us with the tools of our ancestors. That meant layering these Negro Spirituals over contemporary sounds and arrangements that Zonya herself created. By reaching back in time to discover and connect with the tools of our ancestors, she hoped that we too could use these same tools as we carry on the same fight they did over 400 years ago.

Significantly, Zonya does not only relate this music to the times of slavery. She brings this musical tradition forward, through generations of civil rights struggles, and up to the present. She pays homage to ancestors who have continued the struggle in many ways, thanking them by name.

One name that stuck out to me was Fannie Lou Hamer. I’d seen her face shared around social media during the election, and I'd also seen her associated with farming, but never knew her story.

After the reality of the pandemic set in and the theatre as we knew it would change forever, I started taking a look at the world around me and asking myself, what is useful right now? What is useful for this moment? And I thought about food. I thought about how so many mutual aid groups were popping up because folks didn't have the basic things they needed during a pandemic. Can you believe that? And I was particularly struck by the fact that, especially being in a deeply urban environment – living in Philadelphia – food is either overpriced, very limited, and/or not the greatest quality. And this primal feeling inside of me pulled me in closer and asked me to take a deeper look at what this meant for me.

Just as Zonya’s primal connection was to reach back into time to seek help from our ancestors, I found myself doing the same thing, only I felt called to uncover my history through farming and food sovereignty. Living in a world where we are constantly begging for our basic needs to be taken care of, I wanted to find more ways to become less dependent on systems and governments who prove that they are not actually here to take care and support their citizens. I wanted to find ways to put the power back into my own hands, into the hands of my neighbors, and my community. Because if the pandemic has taught us anything, it definitely taught me that we are all we really have. So I wanted to figure out how to take care of the “we”. And I discovered that the more I leaned into this primal feeling, this feeling that was calling me deeper, the more the Spirit put things in my path to deepen that connection. And through researching this education guide for Spiritual Uprising, I uncovered an ancestor who had the blueprint to everything I’d been dreaming of. Fannie Lou Hamer.

Many people may already know of Fannie Lou Hamer through her unwavering civil rights and voting activism work for Black Americans. Once she learned that Black people had the right to vote, she became fearless in her pursuit of making sure our voices were heard and represented in this country – especially Black folks from the South. And while Fannie Lou broke glass ceilings and energized this movement speaking with honesty, conviction, and vulnerability, what captivated me the most was her desire to put the power directly back into the hands of her people. 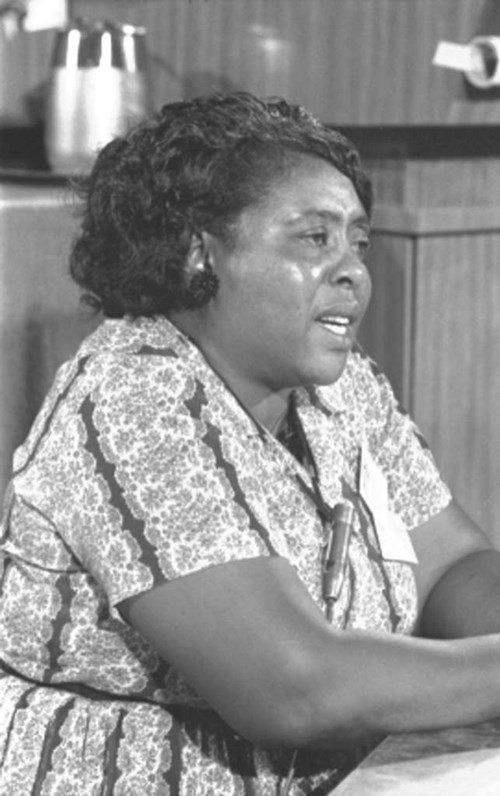 Mrs. Hamer came from a family of sharecroppers. At the tender age of 6, she’d end her short-lived education to work in the cotton fields of Mississippi with her parents and 19 older siblings. By the time she was 13 years old, Fannie would pick an average of 200-300 pounds of cotton a day. Most of her life was spent on plantations trapped in the vicious system of sharecropping that proved to be an exploitative and inequitable scam, keeping Black folks in debt and poverty in the South. Her experience as a poor Black sharecropper was what shook the table and sparked change throughout her political career, but the knowledge she gained from working the land proved to be key in true liberation of Black people in this racist country.

"You know back then people didn’t have food. Half the time didn’t have clothes, and when she would go to different areas up north she would tell them that people down here in the South they needed clothes; they needed food. And they would send boxes and boxes of clothes. Our front porch would be stacked up with boxes with clothes."

Although there's no denying Fannie Lou Hamer had a major impact on voting rights for Black Southerners, the reality was that there were still poor Black Southerners who were hungry, houseless and had no other means of making money. So Fannie Lou, never removed from the needs of her community, encouraged folks to start growing their own food with the knowledge they had from sharecropping.

"I’ve watched this lady sit out in her front yard and peel peaches and pears and put them up in jars and give them away."
– Charles McLaurin

Eventually this birthed into a bigger revolutionary idea: The Freedom Farmers Co-Op (FFC). Fannie Lou bought around 600 acres in Sunflower County for Black Mississipians to farm and live on. She then created the Pig Bank, which was one of the most amazing ideas I’d ever heard of. Dr. Monica M. White explains the concept in this article on Life & Thyme: families who participated in the project would raise a piglet for two years, bring it back to mate at the bank, and then replenish the bank with two pigs from every litter. The offspring could be sold or slaughtered or mated. In addition to this, 70 families were able to stay in affordable housing on the land, they gave scholarships to local Black students so that they could attend college, supported Black owned businesses, and had one of the first Head Start preschool sites in the state! 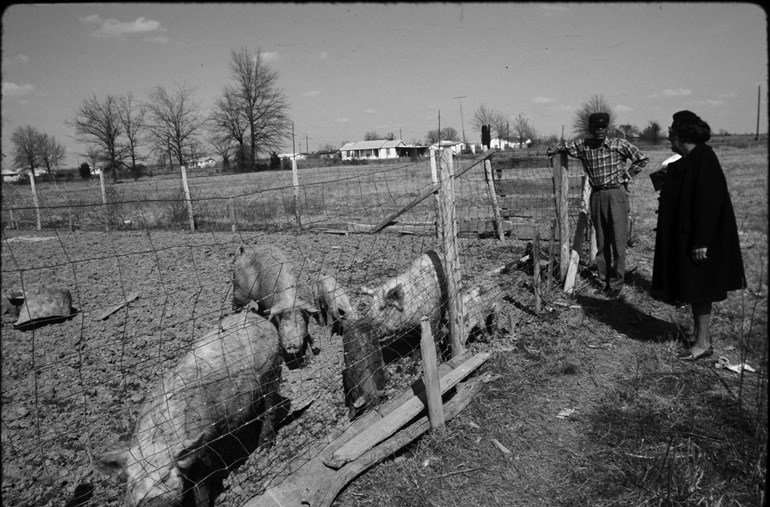 We just thought, you know, if we had land to grow some stuff on, then it would be a help to us, because living on the farm on some plantation, they still don’t give you a place to grow stuff. So we founded Freedom Farms in 1969. And we grew our own vegetables like butter beans, peas, okra, potatoes, peanuts, and then cash crop. The plan of the thing is that it can grow to produce enough that people just won’t know what hunger is.
– Fannie Lou Hamer

The thing that energized me the most about Fannie Lou Hamer is that she was the kind of woman that didn’t wait on anyone to get it right for her. Now, I don’t live inside her mind, but it was clear that she didn't let an ounce of imposter syndrome prevent her from doing the work she felt needed to be done. Similar to Zonya, it felt like she was led by that impulse, the Spirit was guiding her.

Fannie Lou created the beginnings of a world where Black folks were building self-sustaining communities and emphasizing that this fight we are in will only carry on if we take care of ourselves. The Freedom Farm Co-Op inspired me, as an artist and beginning farmer, to see that my ancestors were already doing work that I had been dreaming about. In the book Farming While Black, Leah Penniman notes how the FFC was one of the most important examples of Black Leadership within the farming cooperative movement. And I was inspired to discover that this work continues today through the Federation of Southern Black Cooperatives.

From learning about Fannie Lou Hamer's life, I realized that then and now, we live in a world where you can fight tirelessly to have your voice heard, and even when you get the chance to speak, our oppressors will still relentlessly find ways to make sure that we don’t survive. However, the resilience that I pull from Fannie Lou’s legacy is to not get caught up in the drama. She was focused and had her sights set on what mattered. Making sure the people had what they needed to not only survive, but thrive. 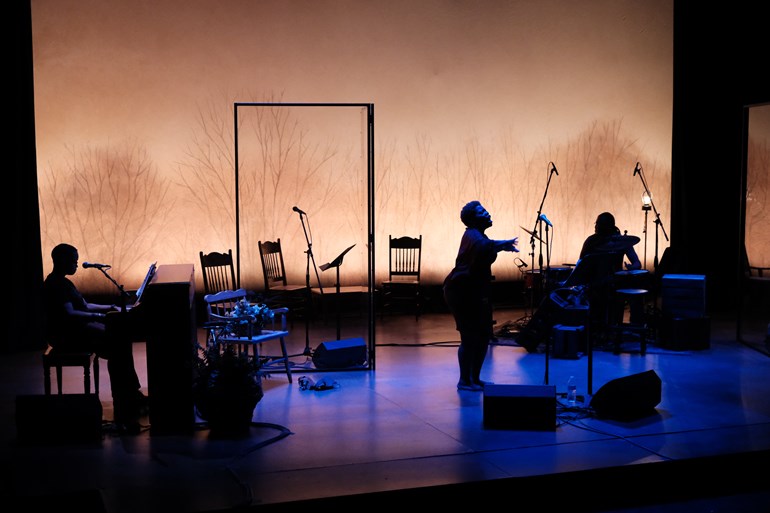 What became abundantly clear to me through her work was that the most effective way to combat white supremacy is not by standing toe to toe with it, but by divesting in the idea that it can be “fixed”. Instead, we turn away from that fight in order to fight for, build, and dream of a world where our basic needs are met, because that is a right, not a luxury. Where knowledge is free and accessible, where we have complete autonomy over our bodies, energy, and time. And most importantly, where we can begin to build a community that's so deeply rooted in trust and love that our bonds become unbreakable and our lives immune to the soulless disease of white supremacy.

I’m grateful for the Spirit that has taken both Zonya and myself on a journey to uncovering our history, connecting deeper with our ancestors, and being guided towards the future with the tools from our past. Thank you, Zonya. Thank you, Fannie Lou.