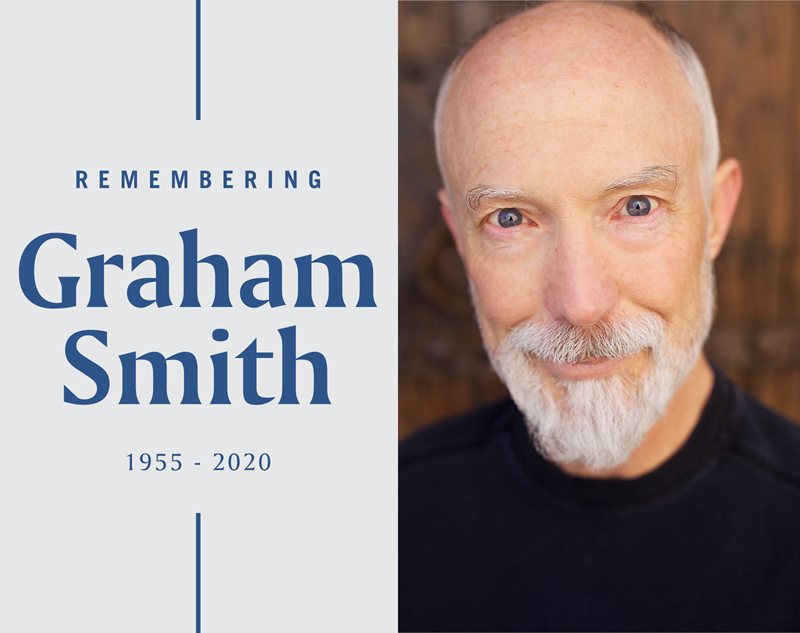 I met Graham Smith and Audrey Brown in 1996 while directing Twelfth Night for the North Carolina Shakespeare Festival. Audrey was the Stage Manager and Graham played Malvolio. My way of working in rehearsal was different to what the company had been used to—more actor centered, less concept driven. Graham, who didn’t much care for directors, loved that. And I loved his quick wit, his delight in making mischief, his worship of language, and his esprit de corps. But we worked very differently. He was precise, exacting, obsessed with making the story clear—it took him years to realize that there are many ways to be clear. I was more interested in subtext, spontaneity, and truth—it took me years to realize that there are many truths. My work was often messy; his was sometimes too clean. Gradually over time, we met halfway and became each other’s best collaborators. There’s no actor who taught me as much as Graham Smith. No actor who could flummox me more with a new idea right as we were about to make the one before it happen. No actor who could make me laugh as hard—often at myself. No actor whose humanity shone through the very pores of his skin in quite the same way.

In 1997 I invited Graham to People’s Light to be in Valley Song, which Stephen Novelli directed. Audrey soon followed in 1998 to stage manage As You Like It. Though they maintained a home base in Charlotte, NC and worked at various theaters around the country, over the next 22 years Peoples’ Light became their artistic home. In the process, we were all graced by the love Audrey and Graham shared.  This was a marriage that inspired confidence, a marriage that reminded you how fun and difficult love could be. And how important Audrey’s cooking really is.

At People’s Light, Graham acted in 33 productions; participated in countless readings, workshops, and special events; and instigated the Semi-Regular People’s Light Bowling Night. Whatever he did, he was always at a hundred percent, all in. Children, young actors, and dogs loved being with him because he was so present, so respectful, so interested in them. And so willing to get into trouble.

I was always fascinated by Graham’s stories about his family’s touring vaudeville-magic troupe. Finally, two years ago I started taking notes, thinking we might make a theatre piece. But one night last winter after reviewing the notes with Graham, I said to him, “Graham, these stories about your Dad and your family are wonderful, but there’s no conflict.” He said, “I guess you’re right. There were issues, but mostly we just loved each other—you’ll think of a way—maybe it’ll be a new kind of theater.” Maybe.

The last play that Graham and I did together was The Children. This was also the last play People’s Light produced that was untouched by the pandemic. Graham was at the top of his game—nuanced, precise, deeply layered, funny, and heartbreaking. Somehow (this is part of the mystery of what great artists do) he found a way to make despair luminous, to make us understand and forgive our human frailty. I can’t imagine not working with him again or seeing him on stage. But as the infinitely generous Audrey said just a few hours after he died, “I’m so grateful I had him for as long as I did.” We all are grateful, deeply grateful, because he left us so much.

Graham Smith in THE CHILDREN | Photo by Mark Garvin Graham Fennel Smith was the funniest man east of the Mississippi.

As a youth, Graham, known as “Pud” in the family and as the fourth child in a brood of five, required more than his fair share of parental upbringing. He delighted in being a mischievous, saucy jaywalker.  In junior high, he once refused to write an essay—folklore has it dealing with evolution—claiming to his teacher, “I’m evangelical, and the topic is against my beliefs.” Graham, however, was a dyed-in-the-wool Presbyterian, twice on Sunday. In high school, Mrs. Mott, the esteemed English teacher, left the room with the exhortation “to please read quietly.” With her departure, Graham promptly stood up, organized a singing round with each row of classmates, and was standing on her desk directing the harmonies when she returned. And in graduate school when he procrastinated endlessly and cavalierly on a major paper, it required tearful beseeching of Mom and the intervention of four siblings to get him to act. Thankfully, he did. Later in life, the only person who kept him from procrastinating was the best stage manager and home manager possible, his wife Audrey. He was a dog lover and took great delight in the golden retrievers that owned him: Tucker, Henry, Slim, and Early, his latest project.

Besides his delightful waywardness, other traits abound. Tenacious with a terrier personality, Graham was all-or-nothing; it was either lights on or lights off, analogous to how he lived and died. He was exacting, demanding of himself as an actor or backyard carpenter. Graham was clean-living, disciplined, and loving: He “hung the moon,” according to his mother-in-law, because “I appreciate the way he treats my daughter.” He was Southern in the right kind of way, possessing an adamantine sense of fairness, conciseness in his voice but still genteel, inching toward the line of impropriety but inserting a wink if he crossed it. Named appropriately for the North Carolina educator and activist, Frank Porter Graham, Audrey and Graham recently gave a sizable slice of their thespian incomes to social justice, Biden, and the Democratic Party. Graham loved to banter and argue; he was witty and smart. He once offered me advice as I headed to a new teaching job in Texas. After reading a profile of the student body with its high number of National Merit finalists, Graham, being a finalist himself and knowing I wasn’t, drily said, “Curtis, I think you better read a few more books before getting in the car.”

Foremost, however, in Graham’s life was acting. He initiated his theatrical skills as a youth in his father’s magic show Saucy Sorcery, honed them at Davidson College, and owned them by choosing to perform throughout the eastern seaboard for forty-three years in regional theater where he, according to Florida Repertory Theatre, “was a giant.” He loved to connect with his fellow performers, to reach every member of the audience, and to seek doggedly the authentic purpose of the play, knowing full well it was elusive, but therein lay the thrill of acting. Like musicians who don’t merely play the notes but seek to make music, Graham wanted to perform with actors who didn’t simply reiterate the lines but who sought the riskier stage atmosphere of letting the play evolve through newfound listening and reactions, hoping for richer, unpredictable but plausible nuances with every performance. The key to this ingredient in drama was to prepare thoroughly so that confidence and risk-taking prevailed, inviting change, vitality, and discovery. It made the play life-like, not simply staged. Graham was a stickler for understanding the play and gleeful to go down any rabbit hole that arose serendipitously. One goal was to perform the role of King Lear one hundred times; he made it to sixty-two. He performed in over 130 plays. Although difficult to choose but still daring to do so, he claims that among his favorite roles were Robin in The Children with People’s Light, C.P Ellis in Best of Enemies with Florida Rep, and Mr. Webb in Our Town at People’s Light. He performed most extensively with People’s Light (1996-2020, his theatrical home), North Carolina Shakespeare Festival (15 seasons, 1998-2012), and the Charlotte Repertory Theatre (1981-2002). He worked with Riverside Theatre, Actor’s Theatre of Louisville, North Carolina Stage Company, Festival Stage, Cape Fear Regional Theatre, The Barter Theatre, Children’s Theatre of Charlotte, and the aforementioned Florida Repertory Theatre.

Although Graham was a joy to watch on stage, his most fascinating role was when he performed with Mom. In the last years of her life, she suffered from severe hearing loss and dementia, not a good combination. Despite these often impenetrable barriers, Graham was a marvel to behold as he broke through them and connected with her. He made her smile, laugh, and seemingly carry on a meaningful conversation. In many ways, this ability underscored his wonderful empathy, a core asset of every great actor and person. To carry it off, Graham meticulously studied her and was thrilled by every bit of small, painstaking progress.

We will miss Graham for his warm, authentic hugs; his witty, chain-reaction humor that builds endlessly; and his irreverent yet sweet, twinkle-eyed presence.

Please go to live theatre and think of Graham as the curtain rises, pledge to honor social justice or send Audrey a condolence card with Elvis on it. We, the family, will resurrect him each time we gather by sharing meaningful, humorous, and lovable stories about Graham. We hope you can as well. Play on!

Donations to honor Graham Fennel Smith may be made to:

Graham Smith Fund with Playworks/First United Methodist Church for the development of The 2021 Theatre Diversity Project
http://charlottefirst.org/contribute
(Click to give, then scroll down for Graham Smith Memorial)

A memorial service will be held at a later time.