Behind the Scenes of a Virtual Hootenanny
June 30, 2020 By: Chaz Brastow, Director of Production 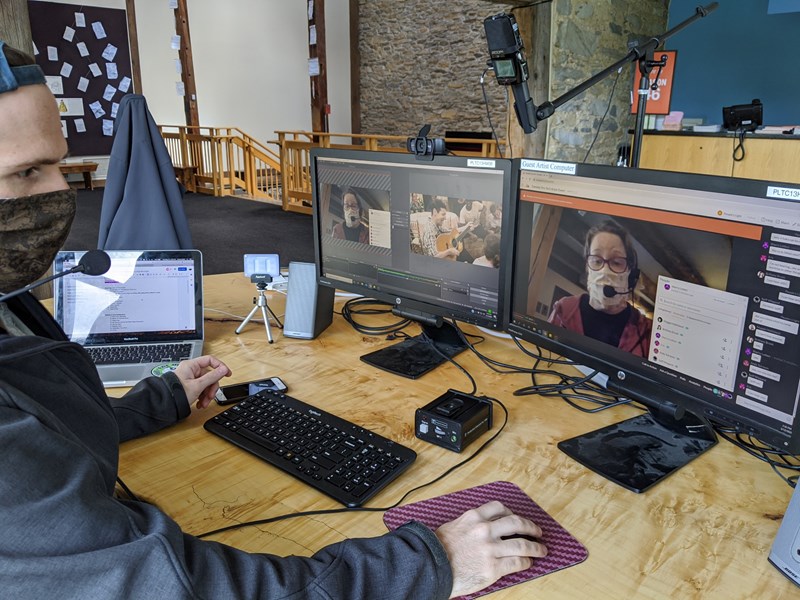 We love when David Lutken is in town and leads one of his post-show Hootenannies in the upper lobby of our Leonard C. Haas theatre! When COVID-19 came a callin’ and separated us all, one of our first impulses was to see how we could bring the joy of these sing-a-longs into your living room.

Like so many of our fellow theatre artists, we were already exploring various formats to share digital offerings with our audience; but the first step was to assemble the band. David has an extraordinary “bench” of artists he has played with throughout the years. And given that distance was no object, or so we initially thought, we could assemble a group from all around the country.

A playlist was being cultivated while the technical exploration began. We learned about Zoom, a video conferencing software; OBS (Open Broadcaster Software), a free and open source software for video recording and live streaming; Crowdcast, another live streaming platform designed for webinars, summits, and more; and the iPhone app Acapella, for recording music and collaborative harmonizing. We discovered who had what in the way of microphones, headphones, computers, iPads, adapters, interfaces, ethernet capabilities, and what strength everybody’s internet signal was. We shipped audio kits to some, dealt with time zone conundrums, and latency—our greatest foe it turns out.

Latency = delay. Simply put it's the amount of delay (or time) it takes to send information from one point to the next. Latency is usually measured in milliseconds or ms. That delay is aggravated by distance as well, so our “all around the country” approach magnified the challenge. Musicians need to play together to truly be in time with each other. With everyone scattered from coast to coast, keeping time was proving impossible and contrary to the very essence of what we were trying to do. We decided to preserve the feel of playing together by creating some pre-recorded content using the Acapella app to supplement the truly live portion of the event when only one artist at a time can be heard. The way the app works is pretty cool. Basically, one person lays down a track and they pass their part along to the next person, adding additional layers as it goes until it circles back to us for mastering. Tori Harvey, Director of Digital Media & Graphic Design, stitched it together and added some graphics, and given the various degrees of technology each artist had at their disposal, Sound Engineer Brent Hoyer polished the sound. 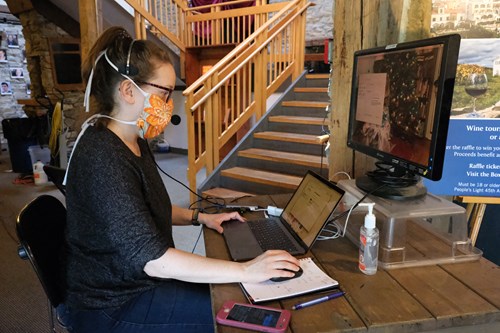 Once we figured out the recording method, rehearsals began in earnest using Zoom and Stage Managed by Kate Fossner, who literally passed the baton from one artist to another as we practiced sharing leads, muting mics, playing with (virtual) waiting rooms, greenrooms, chat rooms, texting, messaging, and hand signals. Our structure of the event was taking shape. A welcome from David, a pre-recorded set, and then our live section. We also needed to figure out a way to make it feel participatory. One of the key components of a Hootenanny is musical instruction, and we wanted to make sure we were able to share the chords and melodies as part of the experience so anyone who wanted to play along could.

In the end, it wasn’t a simple matter of choosing just one of the live streaming softwares mentioned above. We gravitated to Crowdcast for a variety of reasons. We really liked the active chat capabilities and that it had decent audio algorithms for a broadcast. One of the limiting factors of Crowdcast, however, is the amount of “on stage” performers you can have at one time. We had too many. Zoom doesn’t have that problem, but it’s designed for speech, making it less ideal for streaming music. In the end, we decided to combine the good parts of Zoom and Crowdcast, with a helping hand from OBS, to preserve the fidelity of the overall experience. That’s where it started to get interesting.

It was time for a trial run. We tested our individual internet strengths to see who should host the event. We decided that the Congdon Center (home to the People’s Light administrative offices) most likely would have the strongest signal, but just when we went to try it all, we discovered there was a significant problem with a piece of hardware on campus. Yikes! The event was two days away. Our IT specialists Matt Lazorwitz and Jim Woods scrambled to fix the problem. Replacement parts are hard to come by and as we're all aware, shipping times can be sporadic right now. The quick fix? Move to the Haas building. Move to the upper lobby: natural home of the Hoot. Kismet.

All musicians assembled on Zoom from California, the deep woods of Northern Louisiana, and representation from our Mid-Atlantic neighbors. Stage Manager, Director, Sound Engineer, and a Director of Production for moral support. The chat room was buzzing. We had viewers from the Midwest, the Southwest, the Northeast; and from London, Austria, and Germany among other distant lands. We were global!! Song requests were coming in as well as amazing donations. It was a lot of hurry up and wait, but we had arrived.

Below is a short video of that hurry up and wait. Sitting there, on the night, it kinda felt like we were in a NASA control room, launching something into an unknown realm. Going where no . . . Well, you get the idea.

David Lutken and the "Seat of the Pants Band" are back this week by popular demand, with another virtual Hoot on July 2 at 7:30pm! If you can't make the original broadcast, join us for the official replay on July 5 at 2pm. Register below: