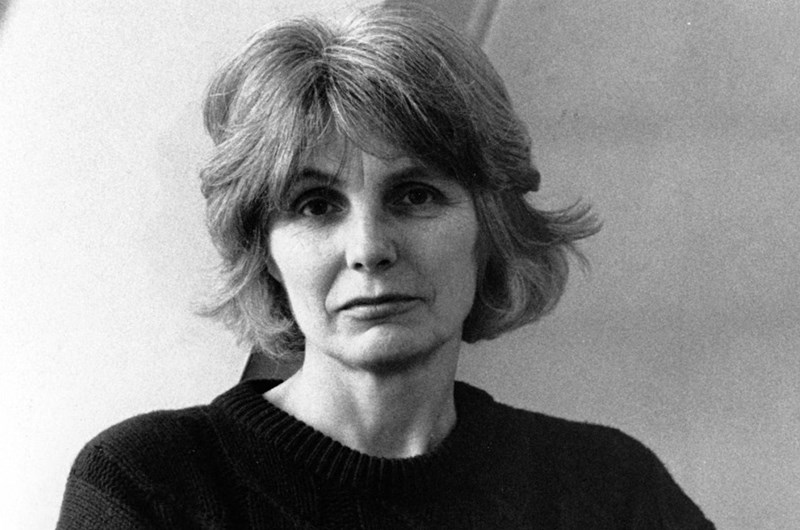 Ahead of our production of Caryl Churchill's A Number, Pulitzer finalist and For Peter Pan on Her 70th Birthday playwright Sarah Ruhl discusses the many reasons why Churchill, with her unparalleled ability to "reinvent form," has a permanent place in her heart – and on her syllabus.

The impact Caryl Churchill has had on contemporary drama is enormous, incalculable, but let me start with my own small frame.

I am watching my mother, who is an actress, play Dull Gret (a woman in a Breugel painting) in Top Girls, at the Piven Theater Workshop in Evanston, Illinois. For most of the first act, my mother has been mostly silent; she eats and occasionally says “potatoes” in a Dutch accent. But at the end of the act, she stands on the table and delivers an extraordinary aria, full of grief and rage:

“We come to hell through a big mouth. Hell’s black and red. It’s like the village where I come from… There’s a big devil sat on a roof with a big hole in his arse and he’s scooping stuff out of it with a big ladle and it’s falling down on us, and it’s money, so a lot of the women stop and get some. But most of us is fighting the devils. My baby, a soldier run her through with a sword. I’d had enough, I was mad, I hate the bastards. Oh we give them devils such a beating.”

And this monologue, delivered by my mother, made me cry. I felt, for the first time, in my body, what Caryl Churchill’s work could do. Her formal genius was managing to create a structure in which many women from different historical epochs can share a theatrical present, and then become other women in the present in the second act. The form made you think, and then suddenly, when you least expect it, you are weeping. 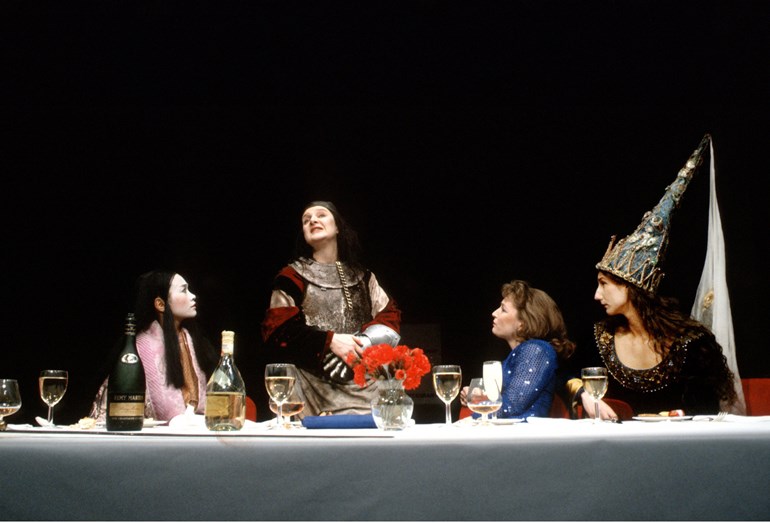 A few years later, I was a young unknown playwright, and someone gave me a free ticket to Blue Heart at Brooklyn Academy of Music. I watch, astonished. Nearing the end of the play, the characters are saying the utterances “blue kettle, blue kettle, bl k kk kkk” and I understood every word they were saying. This was an epiphany. It was as though Churchill had created a theatrical proof—that language was only the icing on the cake, but also decisively created action. The utterance was parted from the action, but still decipherable.

Then came Far Away at New York theater workshop, featuring a young Marin Ireland and the great Frances McDormand. After the terrifying minimalist opening scene came a glorious parade of hats, reminding me that Churchill is a master of surprise. The hat parade had a grotesque logic and was also completely unexpected. It was both brilliant spectacle with a grim political and existential undertone. 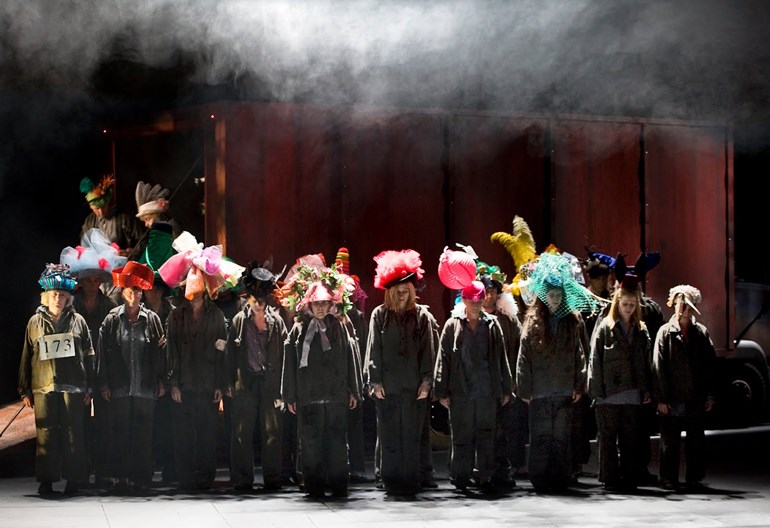 Years later, I end up working with two of Caryl Churchill’s long-time collaborators—the extraordinary and very different directors Les Waters and Mark Wing-Davey. I learn from Les about minimalism, about the unsaid, how it glows on the edges of the stage—not subtext exactly, but as the unsayable. I learn from Mark Wing-Davey about the Joint Stock process, and how to learn from actors—treating them as full intellectual subjects with their own full curiosities—during a rehearsal process. And I feel that these gifts are also from Churchill.

At some point I was able to meet this hero of mine. We had lunch. I learned that we both have three children, we both have celiac disease, and we both throw the I Ching. And that she is every bit as brilliant in person as she is on the page. That Caryl Churchill managed to raise three children and reinvent form with every play she’s ever written gave me courage.  That she was kind as well as fiercely brilliant made me love her even more than I had when I knew her only from the page.

Now, as a teacher at the Yale School of Drama, Churchill is almost always on my syllabus. Unlike some writers, her plays never seem to fade with time, but seem to get etched ever more clearly into the canon, belonging as much as ever to the next generation of her collaborators.

Sarah Ruhl’s plays include How to Transcend a Happy Marriage, For Peter Pan on her 70th Birthday, The Oldest Boy, In the Next Room, or the vibrator play, The Clean House, Orlando, Late: a cowboy song, Dear Elizabeth and Stage Kiss. She is a two-time Pulitzer Prize finalist and a Tony Award nominee. Her plays have been produced on Broadway at the Lyceum by Lincoln Center Theater, off-Broadway at Playwrights Horizons, Second Stage, and at Lincoln Center’s Mitzi Newhouse Theater. Her plays have been produced regionally all over the country and have also been produced internationally, and translated into over twelve languages. Ms. Ruhl received her M.F.A. from Brown University where she studied with Paula Vogel. She has received the Steinberg Distinguished Playwright award, the Susan Smith Blackburn award, the Whiting award, the Lily Award, a PEN award for mid-career playwrights, and the MacArthur “genius” award. Her book of essays, 100 Essays I Don’t Have Time to Write, was published by Faber and Faber. She teaches at the Yale School of Drama and lives in Brooklyn with her family.

A Number, Caryl Churchill's thrilling exploration of identity, parenthood, and the ethics of human cloning, is onstage at People's Light May 15 – June 9. Click here for more info.