Vampires and Their Slayers
October 30, 2018 By: Geri Nonnewitz, IT & Administrative Assistant 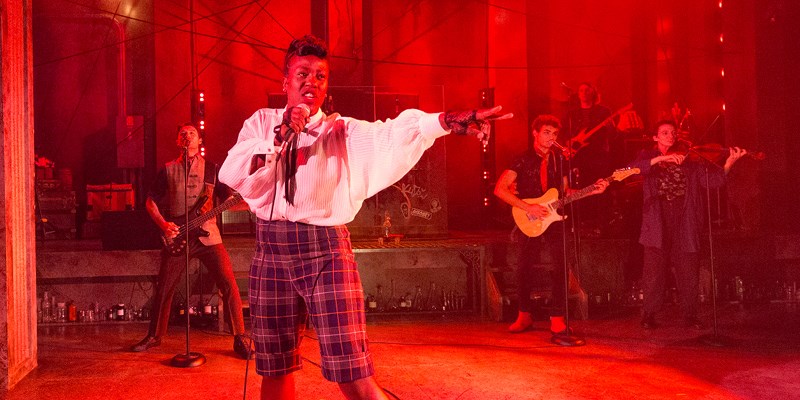 I’ve worked at People’s Light for a few years now. I’m one of the faceless people who work in the IT department. Part of my job is to read all the comments that patrons send in and archive the feedback for future reference.

Allow me to put things in perspective for you. I’m a thirty-year-old visual artist, I’m biracial, I was adopted, I’m asexual, I love the Victorian punk aesthetic, and my entire life I’ve been told my experiences are invalid by everyone but my parents. I grew up without heroes in the media — there was not a single television show or book I could honestly relate to.

It’s not unusual for People’s Light to receive a wide range of audience feedback for the same production – any piece of art elicits a unique response in every person. For the entire run of Such Things as Vampires, we've seen comments across a vast spectrum of extremes. Some people despise this production while others adore it. Negativity, however, impacts me the hardest. Throughout the show's run, a barrage of comments filled with insults and indignation about People’s Light supporting a production like this have greeted me in the morning. Enough that I often felt a twinge of despair driving the hour-long commute to work — should I really drive all that way to read people being bitter without constructive criticism? The answer is yes, because this is the first play in my entire life that I’ve ever connected to.

This sort of production is important. Representation of minorities in media matters, and so does the content that relates to that representation. I grew up with two white parents, in a predominately white school district, and absolutely everyone tried to sit me down and tell me to appreciate what it is to be black or biracial, but they could never give me examples of media that appreciated me. Growing up, there were virtually no fantasy novels with female protagonists of any ethnicity! Most literature pushes the same narrative: a man, archetypically white and handsome, falls in love with a conventionally beautiful woman and saves the day from some nefarious force. And the few novels that did have people of color or other LGBTQ+ representation forced them into negative stereotypes. I came to loathe the “sassy black girl” or the “flamboyant gay.”

Fast-forward to today, and the prospects are slowly improving, but are still grim. Art is being created by people of color and members of the LGBTQ+ community—but there’s still a long way to go.

When I heard that we were putting on a production called Such Things as Vampires and the main characters were people of color, I called my father and screamed with excitement. It was amazing, and something that just didn’t happen around here.

People’s Light has produced many productions featuring a predominantly black cast. Lights Out: Nat "King" Cole and The Mountaintop are two of the most recent and popular productions that come to mind. However, these plays tell a very specific narrative. People may not realize this, but not every black person wants to see a play about black people trying to overcome oppression. It is not what I want people of color or other minorities to be. We are not just people who deal with oppression, we are people. We deal with the same problems the majority experiences on a regular basis! We just have extra challenges we must face from the time we get up, to the time we go to bed.

Such Things as Vampires, to me, is that realization. That people of the minority are people who must face the same challenges as everyone else. They go on adventures, they experience, life, death, laughter, despair, love and hate just like the rest of the world. They shouldn’t be forced into stereotype because “that’s the way it’s always been.” Had something like this play been around when I was a teenager, I think my life would have been completely different. I wouldn’t have felt so isolated because of my interests, and I would have been able to see someone like me in a setting I enjoyed.

I should also mention that there are those who don’t like the play but admit that they are grateful for the chance to see something different. From the bottom of my heart, I must thank these people for understanding why it was so important for Such Things as Vampires to happen at People’s Light. Even if this production is not to your taste, the theatre is not for any one type of person; it is for everyone.

For you, Such Things as Vampires may not be life-changing. For some, this production is what we’ve been waiting for our entire lives.

People's Light welcomes insight from staff members and visiting artists when they wish to share personal reflections about our productions. Read more blog posts like this one:

Beyond Tragedy: Carrying Stories of the Holocaust Forward
Respect and Curiosity in The Diary of Anne Frank