Respect and Curiosity in THE DIARY OF ANNE FRANK
March 29, 2018 By: Alix Rosenfeld, Production Dramaturg 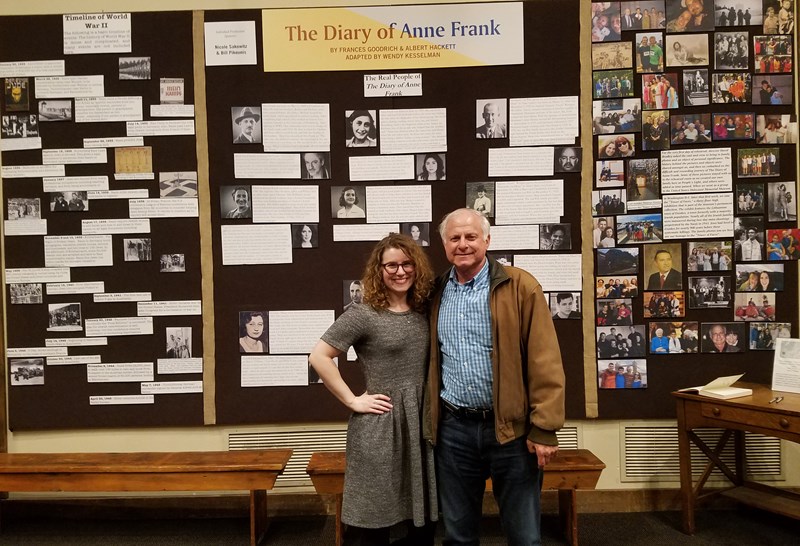 Back in October 2017, a surprise email from Producing Director Zak Berkman appeared in my inbox gauging my interest in joining the team as production dramaturg for The Diary of Anne Frank. Towards the bottom of the message, he wrote, “There will be a multi-racial cast for the production, an approach informed by extensive conversations with a wide number of friends and allies, as well as local and national leaders in the Jewish community, arts leaders, leaders in Equity, Diversity, & Inclusion, and more.”

It might come as a surprise to learn that I wasn’t immediately on board with People’s Light’s decision to do The Diary 0f Anne Frank with a multi-racial cast. I’m an Ashkenazi Jewish woman, and with the many conversations in Philadelphia and beyond surrounding representation, I knew that this production was going to raise some eyebrows. But curiosity (and, quite honestly, the promise of an exciting step in my career) spurred me forward, and I agreed to meet with Zak, Resident Dramaturg Gina Pisasale, and director David Bradley. We spoke of many things that have since been lost to my failing memory, but I do recall talking about my cousins, who are half-Jewish and half-Chinese, and how I believed the legacy of the Holocaust belonged to them as much as it did to me. That initial curiosity started to morph into something more settled, though ease and confidence would come much later.

I’m bringing up my production dramaturg origin story because I think it’s important to note that I had misgivings entering the process. It took some major self-convincing. I had people tell me that I shouldn’t accept the contract, because by agreeing to work on this production I was putting my stamp of approval on an anti-Semitic approach. I spoke with other Jews who were vexed and upset months before the rehearsals were underway, and I took those concerns very seriously. I wondered if I had some kind of ingrained antisemitism and self-loathing that was preventing me from being clear-eyed and able to see the swastika-shaped forest through the trees.

Saying that I was conflicted would be downplaying the complexity of my mental gymnastics. How could I take part in a project that was making some of my fellow Ashkenazi Jews feel erased and dismissed and still call myself a Jew? Would it be possible to hold AND honor the pain and the generational trauma that is my inheritance but still allow others to tell or craft my stories? We as a production team could have the best of intentions, but would those good intentions matter if reception proved negative and was harmful to others? We could be wrongheaded. We could be dangerous.

But we laid out all of our fears in the first rehearsal, acknowledged them, and then got to work. We passed around our own family photos and personal objects, telling the stories that endowed these objects and pictures with great significance (those photos remain in the green room of the theatre today). I presented a 60-page beast of an actor packet, which included some articles I thought would be useful for context ("Being Jewish in the Age of Trump: Jews Must Honor Our History of Oppression By Resisting White Supremacy" and “Anne Frank and her family were also denied entry as refugees to the U.S.”).

We visited the United States Holocaust Memorial Museum. We attended a Shabbat service at Mishkan Shalom. I taught them Hebrew prayers, the proper ways to remove a tallit, the history behind Chanukah. Mark David Kaplan, who plays Otto Frank and identifies as an Ashkenazi Jew, David, and I answered questions about Judaism as they arose. Members of staff met with Rabbis and other faith leaders, held conversations with organizations like the Anne Frank Center for Mutual Respect, agonized over the best ways of creating well-rounded and inclusive community events, sought to feature Jewish artists in the gift shop to give them support and a platform. I can honestly say I have never witnessed such high levels of exertion from different departments of a company funneled so directly into a single endeavor.

Of course, we did the usual theatre work too. Stage management figured out how to track a gargantuan number of props, David choreographed intricate stage pictures, and the actors burrowed deep into character work. I split my time between the rehearsal room and a multitude of meetings. I wrung myself dry of every useful dramaturgical skill I possess, giving every droplet of energy to the script, the design, the interpretation, the marketing, the dramaturgical note in the program, the public production presentation, the lobby display, the moderating of conversations, and the painstaking moments of observation.

Sure, there were times when I thought that things would have moved faster if our entire cast had grown up in the Jewish faith. There were passing moments when Mark and I would share a look of solidarity, because being Jewish comes with a set of shared experiences created by a combo of microaggressions, devastations, and triumphs that can’t be manufactured.

Yet even without that even playing field, the process of representing and speaking to the Jewish experience never felt tedious or a burden. I recognize that this is rarely the case for minorities in a room, but I think the lack of fatigue stemmed from having varying sources of common experience. I had Mark and Zak who just … got it. I had David as well as Melanye, Deb, and John (playing Mrs. van Daan, Mrs. Frank, Mr. Kraler, respectively), who, though they aren’t Jewish themselves, are married to Jewish partners and are raising their children in the faith. I had Eve Trojanov, People’s Light’s Box Office Manager, who sat with me and patiently told me about her non-Jewish grandfather, a man who survived years in Nazi concentration camps after he was taken as a teenager from his home in Russia, and how she saw his story reflected in Anne’s. I had Gina, who acted as a mentor, confidante, and sounding board as I worked through the unending questions I had about best EDI (Equity, Diversity, and Inclusion) practices.

While doing my work and watching the work of those around me, it didn’t take long for me to move from side eye and head tilt, to uncertainty, to assurance, to enthusiastic support. My Jewishness was wanted, respected, and celebrated in ways that I have never experienced before. And it felt genuine. I felt heard every step of the way. Interacting with this art and with this particular group of artists challenged and solidified my identity in unprecedented ways. It reaffirmed what I had always been taught growing up in my Sunday school classes: that “Never Again” meant a commitment to making sure this didn’t happen again to us or to anyone else, and that Judaism is a live, ever-evolving identity.

But even as I write this down, the enormity of these few months seem reduced to something superficial, cheap, and lacking as I read it back to myself. I mean, walking through a museum? At face value, that act and others like it seem like the equivalent of getting points for writing your name at the top of a test. While we rehearsed and prepared, I questioned whether or not it was possible for our efforts to leave a tangible mark on the production and reach out to Jews who might see the play. And what would non-Jewish audiences glean from what we put in front of them? Again, the whole intention/process vs. reception/result conundrum.

It really would have been so much simpler if we were all white, Ashkenazi Jews. Fewer complications, fewer hurt feelings.

But how can I look at David, who is a member of Mishkan Shalom’s congregation, a devoted partner to his Jewish wife, and a supportive father to his Jewish sons, and say: You cannot shape this narrative. You are not a Jew.

How can I look at Melanye and Deb, when I have a picture of the two of them with their husbands and Melanye with the rest of her family on the bema of her daughter’s bat mitzvah, and say: You cannot be a part of this story. You are not Jews.

How can I look at Eve, whose family keenly feels the trauma associated of having a family member who was a Holocaust survivor, and say: You can feel a kinship to this story, but your grandfather, you, and your family are not Jews. Get your own play.

How can I think and say these things and then call myself a Jew?

I don’t know. But I do know that I’m uncomfortable thinking in absolutes ... probably because I am a Jew, and we’re nothing if not inquisitive and challenging. I have difficulties drawing a hard line and saying that only white, Ashkenazi Jews should take part in The Diary of Anne Frank. This kind of thinking requires a loosening of the grip of ownership. This rehearsal and production process required some amount of letting go and trusting that other, non-white Ashkenazi artists could do justice to my people’s story. It required trusting that audiences would walk away from this production knowing without a doubt that the story they saw was the story of eight Jews in hiding, even if the faces on stage didn’t look like the ones of history. But trust is not easily earned, and it can be difficult for others to bestow it when the stakes are high.

A mentor of mine says that she believes an artist can do just about anything as long as they approach that work with respect and curiosity. I agree. Mindful irreverence is more or less my artistic motivation. However, I would take this a step further and say that respect is elusive, and most people only do half of what is necessary and then think they can rest easy on those attempts. So, if an artist takes the responsibility of respect seriously, can they investigate something deeply personal and integral to an identity of a group of people?

Respect and curiosity. Is that simple formula enough to build bridges and establish trust between artists and those experiencing the art they create? I hope so. We might stand to gain more than we stand to lose. And did People’s Light move through this process with respect and curiosity? Is that intention clear in the production and what surrounds it? It is ultimately not for me to say. I am one person, and therefore cannot be the sole arbiter.

It is impossible to communicate just how much care went into creating what is now running on the Haas stage. The weight of it all lives within me and within our team. All I can hope for is that the public perceives the investment and feels the reverberations of that investment. What I want to know is what do you, the person engaging with our art, think? Did this production and the surround programming pay the respect that Anne and other Jewish people deserve while offering a chance to be curious and explore what her story says about our world today? Let us know. Talk to us.