No matter what name you know him by, if you’ve visited People’s Light at any point in the last 40 years, you’ve experienced something Jeep designed. Any one of his 237 scenic designs, or his 117 lighting designs, perhaps, but Jeep’s work is so ingrained in the fabric of People’s Light that there isn’t a room you can walk into that he hasn’t left his mark on.

Old and new friends alike gathered last week to celebrate Jeep’s retirement from the position of Director of Design, and his many accomplishments throughout his career. It was exactly the kind of retirement party anyone could wish for – good food, better company, and plenty of teasing anecdotes to go around.

Jeep joined People’s Light in 1977. His first project was designing the lights and sets for Antigone, and he’s been an unstoppable force ever since. In Artistic Director Abigail Adams’ words, “his designs were and continue to be spare, always in support of the story – creating a container for the actors to do their work. And yet, over the years his sets have taken on what one consultant called a sly “wow” power. Audiences walk into the theatre and just say “wow.” He set the bar for the wow.”

His resume is staggering in its breadth, depth, and sheer volume – and not only at People’s Light. He’s designed in prisons, schools, in Chester, Philadelphia, and even international venues in Cyprus and Hungary. Prince Valiant with a suede waistcoat

Director of Production Chaz Brastow recounted the first time he met Jeep in the 80’s. It was a typical theatre story – the frenetic energy of a closing performance, and all-hands-on-deck to strike a set. “An army descended on the space” and chairs were being stacked before the audience had completely cleared out. Chaz was the starry-eyed summer intern, and to quote him directly: 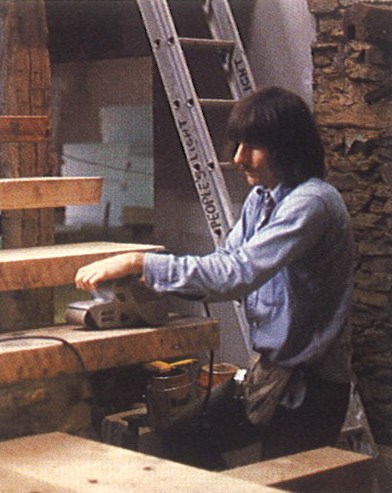 “…and then Prince Valiant with a suede waistcoat stepped into the middle of the room, parted his hair, looked in my direction and pointed to the heavens and said “Go. They’ll show you what to do up there.” The Prince was the “Jeepster” and he was directing traffic above and below having designed the set and the lights. I didn’t see him all that much the rest of the summer since I was in rehearsal or performance, but when I did see him he was usually clutching a Rolling Rock.”

Jeep is a self-described “earthy kind of guy.” It’s accurate. He’s known for meticulously detailed backyard scenes, working with trees whenever possible, and we’re still finding dirt from our production of Hamlet in ’87. Jeep designed the 900 AD set with steep amphitheater seating that wrapped around a circular pile of “about 40 tons of baseball infield dirt” and giant boulders that still live throughout our property. Hamlet was the first Project Discovery (now Arts Discovery) show at People’s Light. While Abbey called his design work “spare,” Joe remembers the 90’s a bit differently and spoke to some of Jeep’s more elaborate designs.

“Who could forget Sister Carrie,” he said, laughing. “The show that had so much scenery, we had to build a storage building alongside the theatre to store it in.”

Glengarry Glen Ross also sparked a vibrant memory for Joe. “We would chase the audience out of the theatre during intermission. The first three rows of seats were on two large wagons and we moved the seating from proscenium to thrust for the scene change from office to Chinese restaurant. The back stage area was so full of scenery. When you came in from the shop door you had to climb over the set to get into the space.” 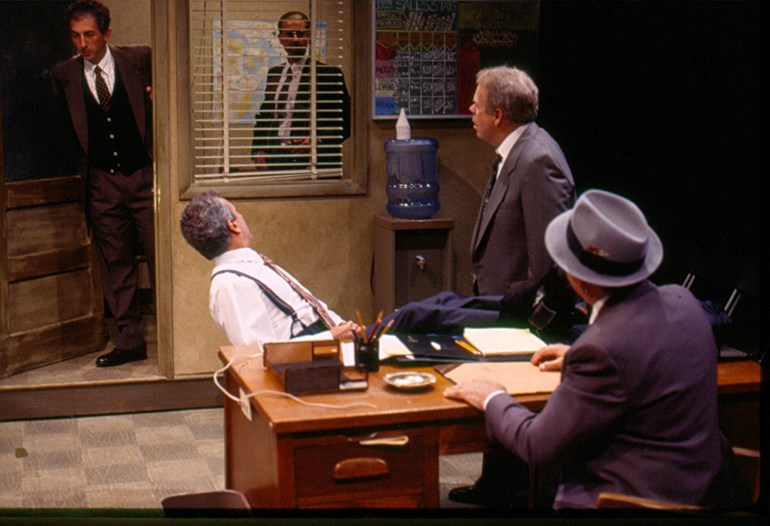 In more recent years, Jeep continued to design classics: Macbeth, The Crucible, A Midsummer Night’s Dream, Twelfth Night, Member of the Wedding, The Persians, Glass Menagerie, King Lear, and Merchant of Venice (for which he won a Barrymore Award) to name a few. Contemporary and new works, too: Willy Holtzman’s Hearts, James Still’s He Held me Grand, Outside the Box and 30 Fest – each of which included between 12 and 14 plays, Humble Boy, Theopholis North, The Giver, The Man from Nebraska, and Holes to name just a few. How? How does one man produce this much work, with such good humor, and a truly never-ending supply of puns? Jeep’s personal philosophy of 60/40 might have something to do with it. To paraphrase, Jeep explained that he went into each work day with the assumption that he would accomplish 40% of his own to-do list. The other 60% of his time would be spent helping his colleagues and collaborators. Few words can capture the swiss army knife routine Jeep lives by, but the Production Department gave it a solid try, and crafted a special award to acknowledge all that Jeep does and the spirit with which he does it.

Roughly translated, in a Wile E. Coyote kinda way to:

Someone who mixes mirth with serious matters and does so with equal weight, fervor, and enthusiasm.

In closing, we’ll share one of Abbey’s most vivid memories of Jeep:

“Five years ago he was in charge of creating the outside Festival environment for A Winter’s Tale. The project was funded by PEW and the outside was supposed to be as big a deal as the inside. But we really didn’t have the labor force for both and our friends the Scots who were directing and designing thought differently about budgets than we did. So Jeep got a posse of pals together and with wood from a newly taken down barn, they built a performance shed in the circle in front of the Haas. He collected hundreds of tin cans and then commissioned my brother [Hank Adams of Wheaton Arts] and his team of artisans to make lanterns sculpted by blow torch, each one different. The lanterns needed to be wired and hung and again, there wasn’t enough labor. So with a number of strings left to go it was just Jeep and me in the frickin’ cold up on two ladders. At one point, I looked across at him on top of his ladder and said, “How the hell did this happen, we were doing this sort of thing 35 years ago.”

And he just laughed and said, “That’s right, Apple, isn’t it great!”

And ultimately it was. Before each performance the actors with fiddles, accordions, and tambourines, sheltered by the shed, would play for the crowd as they drank hot cider, warmed themselves by the giant chimeneas, and sometimes sang along. Uncannily, the snow fell more often than not around 7pm that winter amidst our vast ceiling of lanterns, and it was magical. It transcended set design – it was an epic physical gesture that brought audiences, performers, and the cosmos together in present time.

Here’s to you my friend, with our gratitude, our admiration, and our love. May you thrive!” Many of these words were written by Abigail Adams, Charles Brastow, and Joseph Franz.